Langseth & Rosenfeldt Inducted into the Oak Grove Hall of Fame 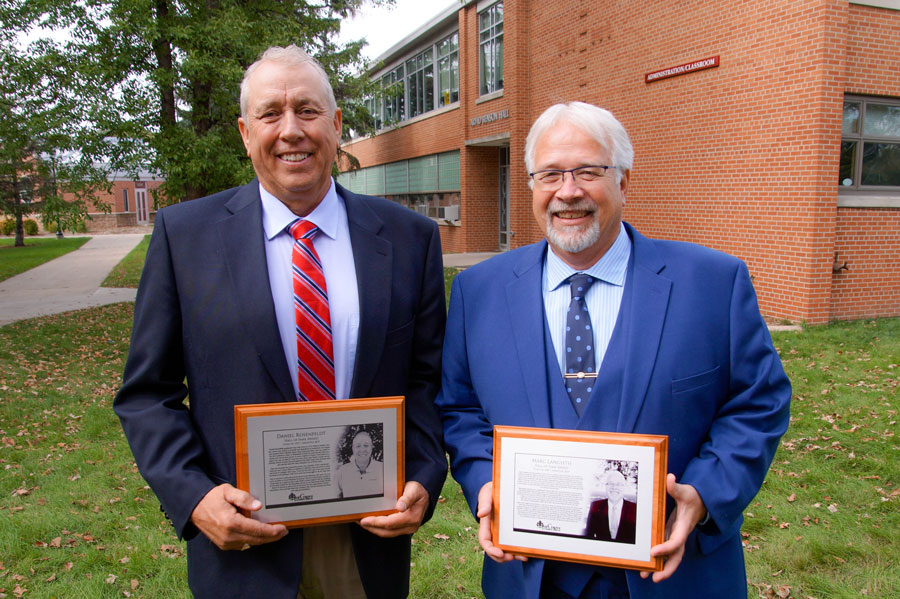 On Saturday, September 28, 2019 Oak Grove Alumni Marc Langseth (Class of 1969) and Daniel Rosenfeldt (Class of 1973) were inducted into the Oak Grove Hall of Fame as part of the 2019 Homecoming Festivities. Langseth and Rosenfeldt both addressed those who gathered in the Eid Center with inspiring words and stories from their time at Oak Grove. Read their impressive biographies below.

Daniel Rosenfeldt graduated from Oak Grove in 1973. While a student, Dan was a three-year starter in Football and Basketball. In Football, he was captain and awarded Most Valuable Player, Most Improved Player and was named to the All-Conference Team. In Basketball, he held the most blocked shots in a season and was the first person to score a basket in Gorder Gymnasium in a game. Dan also excelled in track and was a three-year Varsity runner and set multiple school records. He participated at the State Track meet all three years and was the state 440 relay champion two of those years.

Dan was awarded the Quanbeck Award, was a member of the Letterman’s Club and was a Class Officer. In addition to athletics, Dan was active in choir and went on multiple choir trips. “I love the fact that I got to be a part of and involved in everything at Oak Grove and was encouraged to do so,” says Dan.

Dan is married to Julie and actively farms in the Glyndon, MN area. He is an active member at Good Shepherd Lutheran Church in Moorhead, traveled to Guatemala on a mission trip to help build a school, helped with the building of Churches United for the Homeless, served on the Moorhead Youth Hockey Board of Directors, and serves on the board for the Sugar Beets Growers Association. Dan and Julie have four children; Kari, Steven, Rachael and Katie, and eight grandchildren.

Marc Langseth has been involved at Oak Grove as a student, coach, and teacher. As a student, he excelled in academics, athletics, and music. He was salutatorian and was chosen as the Outstanding Senior by the faculty. Marc was a three-year starter in both Football and Basketball. He was a co-captain of the undefeated 1969 state champion basketball team and was named the Most Valuable Player of the state tournament. Marc was also chosen as a member of the Class A and B combined All-State Team. He was a two-year member of the concert choir and the boys’ quartet and was active in track, student council, Fellowship of Christian Athletes, and was president of the Lettermen’s Club and National Honor Society.

Returning to Oak Grove as a mathematics teacher, Marc also coached football for seven seasons, making the playoffs three of those seasons. He coached boys, girls and women’s basketball for 29 seasons at Oak Grove and Concordia College and amassed over 400 wins. His Oak Grove girls’ teams placed third in the State B in 1979 and 1999. In girls’ basketball, Marc was chosen by his peers as the District 2 Coach of the Year six times. He coached Concordia’s Women’s Basketball from1980-1984 and his teams participated in the national tournament all four years, including the national championship in 1982, where Marc was named National Coach of the Year.

Marc is the longest-tenured teacher in Oak Grove’s history, teaching 40 plus years. The Grover math teams have consistently placed at competitions regionally and statewide, and the mathematics program has grown to include AP and dual credit classes. He has enjoyed sharing with the students and staff in chapel on a regular basis, whether it be as a speaker or as a member of the worship team. Marc is married to Mary and he finds great joy in spending time with their children Heather, Eric, and Hannah and their families. His passion is teaching and helping to enrich the lives of his high school students. According to Marc, “Hopefully, I have been able to make a difference in the lives of my students and my co-workers, just as my teachers, coaches, and mentors did for me.”